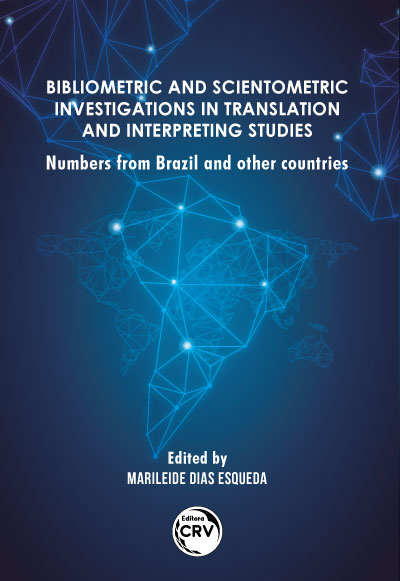 Bibliometric and scientometric investigations in translation and interpreting studies:
numbers from Brazil and other countries

This book is the result of years of collaboration among professors and students of the Research Group GETTEC – Group for Studies and Research in Translation, Technologies, Teaching and Scientometrics, linked to the Graduate Program in Linguistics of the Federal University of Uberlândia (UFU), Minas Gerais State, Brazil. The activities of GETTEC started in 2018 and, immediately, its first members, involved in investigations inserted in different subfields of Translation and Interpreting Studies, such as translation teaching, translation and interpreting technologies, audiovisual translation, machine translation, machine interpreting, interpreting, among others, realized that basing their studies on a single list of authors would not provide them with a comprehensive view of Translation or Interpreting Studies, nor would it show them the evolution of these fields. Seeking to trace the course of scientific shifts in Translation and Interpreting Studies, GETTEC’s members decided to implement bibliometric and scientometric analyses, more specifically in their subfields of study, so that they could better know their trends and the most representative types of methodologies used in them.

CAIO CESAR MARTINO
Holds a Master’s degree (2021) in Letters (Language and Literature) from Federal University of Paraíba (UFPB) – Brazil, in the area of Literature, Culture and Translation, in Translation and Culture line of research. He has degrees in English Language Teaching and Literature from UFPB (2004), and in Translation Studies from the same university (2014). He taught English as a foreign language from 1993 to 2013 both in language schools and at university level at UFPB. He has been translating since the 1990s and since 2013 he has been the official translator for UFPB, work-ing in the UFPB Agency for International Cooperation (ACI/UFPB).


CRISTIANE CARVALHO DE PAULA BRITO
Is a Professor at the Institute of Letters and Linguistics at the Federal Uni-versity of Uberlândia. She holds a Ph.D. and a Master’s degree in Applied Linguistics from the State University of Campinas (Unicamp) – Brazil. She is the leader of the Research Group Laboratório de Estudos Polifônicos (LEP) and vice leader of the Human Language and Artificial Intelligence Research Group. Her areas of interest are: teacher education, language teaching and learning, Discourse Analysis and Applied Linguis-tics.


FLÁVIO DE SOUSA FREITAS
Holds a B.A. in Translation from Federal University of Uberlândia (UFU) – Brazil. He is currently a Ph.D. student in Linguistics at the same univer-sity. He investigates translation and interpreting technologies. He has pub-lished several scientific articles and a book in the field of machine inter-preting.


JAVIER FRANCO AIXELÁ
Is a senior Lecturer in English-Spanish translation at University of Alican-te – Spain, where he teaches literary and medical translation, together with theoretical issues in graduate courses. For twelve years, he was a profes-sional translator and has published approximately 40 translated books in Spain. His research topics include the history of translation, medical trans-lation, and the manipulation of culture in translation. He is also the creator of BITRA (Bibliography of Interpreting and Translation), available online.


MARILEIDE DIAS ESQUEDA
Is an Associate Professor in the Graduate Program in Linguistics and in the Undergraduate Program in Translation at the Institute of Letters and Linguistics at Federal University of Uberlândia (UFU) – Brazil. She holds a Ph.D. and a Master’s degree in Translation Studies from State University of Campinas (Unicamp) – Brazil, and a post-doctoral degree from Univer-sity of Montreal – Canada. She was the president of the Brazilian Associa-tion of Translation Researchers (2013 2016). She is the author of several books and articles published in national and international journals on the following topics: translation teaching and learning, translation and inter-preting technologies, audiovisual translation, and scientometrics.

ROBERTO CARLOS DE ASSIS
Is a professor at the Intercultural Mediation Department of Federal Uni-versity of Paraíba (UFPB) – Brazil. He holds a Ph.D. in Applied Linguis-tics, in the area of Translation Studies. He teaches courses on translation in both undergraduate and graduate programs. He was the president of the Brazilian Association of Translation Researchers (2017 2019). His main research interests are translated literature, English and translation teaching. At present he is the coordinator of the B.A. in Translation of UFPB.